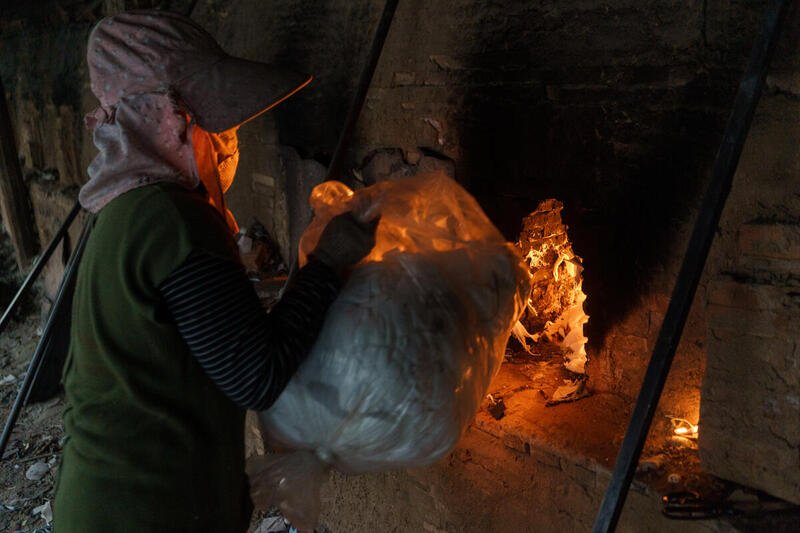 Clothing waste generated in Cambodia during the production of apparel and footwear for global fashion brands, including Nike, is incinerated to fuel brick-making, driving emissions and exposing bonded workers to toxic fumes.

This is happening despite many of these household names having made high-profile pledges to cut waste and emissions and crack down on modern-day slavery.

The scraps are mostly offcuts from Cambodian factories that manufacture clothing for leading fashion brands.

These factories dispose most of their textile waste at a landfill or elsewhere through licensed waste disposal companies.

But through a web of middlemen, some of the waste is sold to kiln owners as cheap fuel – despite this practice breaching environmental laws and regulations.

To manufacture bricks workers move dried slabs of clay by hand into the kilns, where they burn for a couple of days in temperatures reaching up to 650C.

To maintain such heat, the kilns need to stay fired and workers burn fuel – in some instances a mix of garment waste and wood – around the clock.

A large proportion of clothing is made up of synthetic materials like plastic which, when burnt, can often release toxic chemicals.

As a result, burning garments in kilns causes local air pollution and exacerbates the carbon footprint of clothes destined for Europe and the US.

The black plumes of smoke often seen rising out of the kilns endanger the health of vulnerable workers, with reported health impacts including coughs, colds, flus, nose bleeds and lung inflammation.

‘The burning of acrylic garments, especially when combined with plastic bags, hangers, rubber and other waste as occurs in Cambodia, releases plastic microfibres and other toxic chemicals into the immediate environment which compromise the health of workers and neighbours on a short and long term basis. The human impacts, in particular, are substantially worse than burning wood and have been highlighted in a recent UK parliamentary report as a major problem in the industry.’

The Cambodian brick sector has also become infamous for human rights abuses, including debt bondage – the most common form of contemporary slavery, according to the United Nations (UN).

Many kiln workers are ex-farmers, who took out loans to meet farming expenses and whose crops failed because of unpredictable weather patterns caused by climate change, according to Dr Parsons.

Entire families can end up trapped for years in intergenerational debt bondage, with children taking over the parents’ debt after their loved ones pass.

Unearthed spoke to 21-year-old Samneang, whose name was changed to protect his identity. He has been paying off his parents’ $2,000 debt since he turned 15.

Samneang’s health seems to have already suffered from working at the kiln, and he has since borrowed an additional $400 from the kiln owner, partly for medical expenses.

‘It’s sickening to see fashion waste from leading brands being turned into toxic pollution in kilns employing modern-day slaves. Scorching heat, poisonous fumes, and appalling working conditions – this is a hellscape that should have no place in any 21st-century industry.

‘Many of these brands have been trumpeting their efforts to cut waste and carbon emissions, yet they have failed to stop these awful practices from happening on their watch. This is rank hypocrisy. The fashion industry keeps churning out mountains of waste at both ends of their supply chain, and all too often it’s poorer communities in the global south that end up stuck with it.

‘If Nike, Clarks and other corporates mean a word they say about waste and human rights, then they should finally question their wasteful business model and clamp down on any form of modern-day slavery and environmental destruction anywhere in their supply chain.’

While kiln fires are mainly fuelled by wood, a 2020 survey conducted by a local union and Dr Parsons found that 23 out of 465 kilns burnt garment waste.

‘And they were in most cases burning several tonnes a day. So we’re looking at hundreds of tonnes of garments being burned every day’, Parsons told Unearthed.

The apparel industry has been the lynchpin of Cambodia’s economy and the biggest employer in the country, hiring over 700,000 mainly female workers.

But it has also been the biggest industrial waste producer, generating no less than 90,000 tonnes of garment waste per year.

The brands whose offcuts Unearthed found at the kilns incinerating garment waste have committed to ambitious social and environmental sustainability targets in their operations.

They have anti-mondern slavery statements and pledges to eliminate waste and carbon emissions in their supply chain.

Nike’s much-advertised ‘Move to Zero’ campaign promises a ‘journey toward zero carbon and zero waste”’. This includes diverting 100% of waste from landfill in Nike’s supply chain and zero carbon emissions – meaning they’ll be at or below 2020 levels – from key suppliers by 2025.

Nike, Ralph Lauren, Michael Kors, Reebok, Next, Clarks and Diesel also have supplier codes of conduct, which at the very minimum require factories in Cambodia to respect local environmental laws and dispose of waste in line with applicable regulations.

Unearthed contacted all the brands featured in the investigation to give them the opportunity to comment on the findings.