Celebrities pose with fish to raise awareness of overfishing 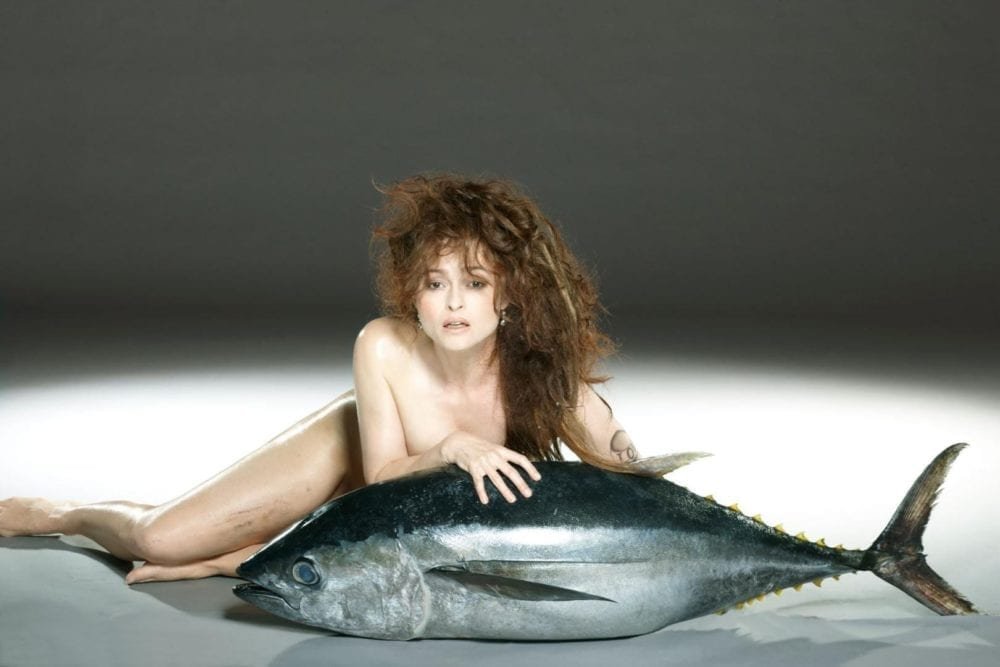 The John Swannell Fishlove collection contains portraits of celebrities as you’ve never seen them before: Helena Bonham-Carter, Dame Judi Dench, Julie Christie, Fiona Shaw, Hugh Bonneville and Zoe Wanamaker are just some of the stars who have posed nude with fish in support of the global movement to protect our seas from destructive fishing practices.

The collection has helped to raise awareness for The End of the Line, the award-winning film about overfishing, and campaigns such as OCEAN2012, BLOOM and GB Oceans.

Dame Judi Dench is captured with a lobster – one of the species threatened by ocean acidification.

‘I agreed to participate in Fishlove because I thought it was a very worthwhile cause.

‘I chose a lobster because I have a passion for them. The best part of the photo shoot was that it is not every day you get to cuddle a lobster. The worst part was that I did not get to eat it.

‘I have always loved the sea. My brothers and I learned to swim practically before we could walk, and swimming in the sea is unsurpassable.

‘I hope the campaign will achieve awareness of what we are doing to the planet.’

The launch of Helena Bonham-Carter’s image in February 2015 succeeded in persuading the UK government to commit to establishing the largest continuous marine on the planet, around Pitcairn in the Pacific.

‘It’s very proud-making that the UK government has just declared the largest marine reserve in the world.

‘The waters around Pitcairn are teeming with turtles, whales, sharks and tuna, like the one I was cuddling in the Fishlove pictures. Thanks to this move by the government, these threatened species can regenerate and we won’t have to explain to our great grandchildren what a tuna is.

‘I never knew taking my clothes off could be so effective . I must do it more often.’

Globally, overfishing is currently the top threat to the sea and the creatures within it.

Illegal (or pirate) fishing is another large component of overfishing, causing estimated economic losses to coastal states of $10 to $23 billion annually. Illegal fishing represents as much as 40% of the catch in some fisheries, according to the US National Oceanic and Atmospheric Administration.

Often called global warming’s evil twin, ocean acidification has not been studied for as long but the results could be far-reaching. The pH of the sea has remained stable for 60 million years; now it is changing as a result of the build-up of carbon dioxide in the atmosphere.

Wind and wave action interact with CO2 creating carbonic acid and making the oceans more acidic. What we don’t know is how this will affect the survival of animals with carbonate shells, such as mussels, lobsters and plankton.

The puzzle is that many animals with shells evolved millions of years ago when the ocean carried more dissolved carbon dioxide than today. Animals might still grow, but they may be stunted or grow differently. For example, acid can has been found to make lobsters put more energy into growing thicker shells.

The oceans’ last wild places are no longer protected by their remoteness: the world’s fishing fleets can now venture almost anywhere, including the waters around Antarctica. Thankfully, some remote places are being protected as marine reserves.

President Obama declared a vast reserve around the Pacific Remote Islands last year and this year, George Osborne announced the intention to create the largest continuous reserve around Pitcairn in the Pacific.

In its manifesto, the Conservatives went further, undertaking to create a ‘Blue Belt’ around the UK’s 14 Overseas Territories and to complete a network of marine conservation zones around the British coast.

This represents the largest commitment to marine conservation of any government in the world. Speedy implementation of this manifesto commitment is now required from the new Conservative government.

Fishlove was set up in 2009 by actress Greta Scacchi and Nicholas Röhl, co-owner of Brighton based restaurant MOSHIMO. Click here to find out more and to buy posters.