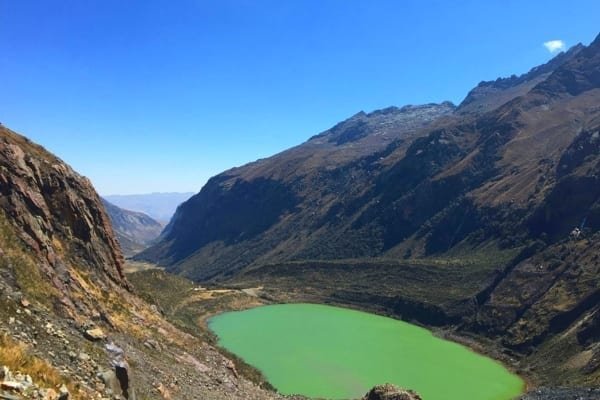 Hay Festival and the UK’s Natural Environment Research Council (NERC) have unveiled Glacier Shallap – Or the Sad Tale of a Dying Glacier.

The short film, from writer and actress Erika Stockholm, draws on the work of Cabot Institute’s Professor Jemma Wadham and her team of glaciology experts in the High Andes.

The film is the final piece of work from the Peruvian strand of Trans.MISSION II, a global project pairing leading environmental researchers with award-winning storytellers to communicate cutting-edge science.

The impact of glacial retreat

Performed as a short play at a special event during Hay Festival Arequipa last month, the piece spotlights Peruvian glacial retreat and its impact on water security and resilience to natural hazards.

In it, Stockholm tracks the glacier’s rapid melting of the past 50 years, giving voice to the glacier itself as our warming world brings about its end. Glaciers in the Cordillera Blanca of Peru have lost an astonishing quarter of their area since the 1980s.

At a time of unprecedented public interest in how human actions affect the environment, Trans.MISSION II will pair NERC researchers from Peru, Colombia and the UK with artists and storytellers in each country to create stories about ongoing research projects.

Trans.MISSION II is the first international public engagement collaboration project for NERC, with new pieces of work to be launched at subsequent events in Cartagena, Colombia (30 January-02 February 2020) and in Hay-on-Wye, Wales (21-31 May 2020).

‘We are really pleased to be launching this collaboration between Erika Stockholm and Jemma Wadham. Wherever we are in the world, Hay Festival is a home for storytellers, a space for writers and readers to come together and explore the biggest challenges of our time. Trans.MISSION II offers a new platform for collaboration between storytellers from two different worlds, artists and scientists. We hope that by building this shared space for engagement at the cutting edge of environmental research with NERC, we can find new ways to imagine a better future together.’

After Peru, Colombia’s collaboration will focus on the importance of biodiversity and will feature Colombian art critic, curator, translator and author Juan Cardenas, while the UK will look at droughts and water scarcity, with participants to be announced soon.

An artist, illustrator or animator will then be commissioned to create an overarching piece – an animation, infographic or animated text – that will combine and communicate the common themes. The aim of these pieces will be to inform, engage and inspire members of the public and future researchers in environmental science and the processes of research.

Erika Stockholm is a Peruvian writer, theatre producer and actress, and President of the Asociación Cultural ¡Al teatro por primera vez!. The main aim of this non-profit association is to encourage and promote culture to children, teenagers and adults who have few resources to take part in cultural and artistic activities.

Erika has published 10 children’s books, among them María Julia y el árbol gallinero and, most recently, Pabellón, spotlighting the plight of Venezuelan refugees. Her stories have been translated and adapted to theatre, and used as a model in workshops on literature and creativity.

‘We wanted to explore the problem of melting glaciers from a more emotional perspective through a story that connects fact with feeling. Our aim is for non-specialists to understand what is happening and to consider how to reverse this tragedy of climate change.’

Jemma Wadham is Professor in Glaciology from the Cabot Institute at the University of Bristol (currently on secondment). She researches hydrological and biogeochemical processes that occur within glacier and ice sheet systems and in their fore fields, which have a regional or global impact.

Jemma has published more than 100 scientific articles and book contributions and is currently leading field expeditions to glaciers in Peru, Chile, Greenland and the Himalaya.

‘I’ve been passionate about glaciers and their changing wildernesses since the age of 14 and have seen first-hand the impacts of climate warming on our glaciers. I’m really excited about the opportunity to work with Erika to create powerful stories about changing glaciers in the tropical Andes of Peru, touching people in a way that would be difficult to achieve using scientific facts alone.”

PROFESSOR JEMMA WADHAM
Cabot Institute at the University of Bristol

Hay Festival addresses environmental concerns through its Green Hay programme of conversations and lectures, and by working hard to limit its own negative environmental impacts.

Mains electricity at the Festival is 100% renewable, 80% of waste produced on site is recycled and last year it was the first festival in the UK to offer a reusable hot drink cups system.