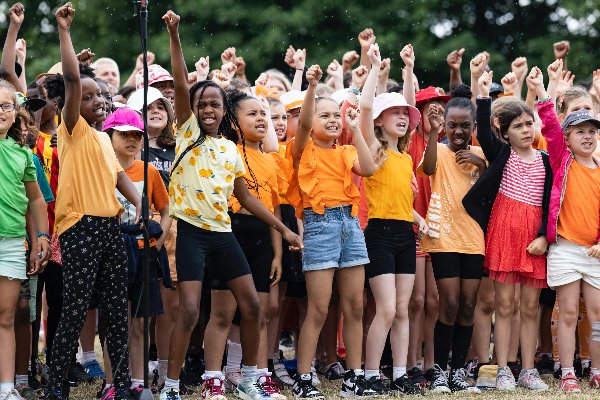 Hundreds of young people have taken part in Hope 4 Justice, a multi-layered performance piece and call to action created and produced by Trinity Laban as part of We Are Lewisham, the Mayor’s London Borough of Culture 2022.

Protesting about the climate emergency, the free outdoor event (on 18 June) brought together new songs and music, choreography and spoken word with a significant processional element. An audience of 1,000 attended the performances.

A call for climate action

At heart of the piece were a series of newly composed songs by Mercury Prize nominated composer, singer and multi-instrumentalist ESKA, performed by a choir of primary school children and joined by musicians from Trinity Laban as well as South London Samba.

These were interspersed with spoken-word interludes created by local teenagers, who worked alongside writer and Young Poet Laureate for London 2020/21 Cecilia Knapp.

All the thematic content was the result of collaborative workshops led by Trinity Laban with local young people exploring their connection to climate emergency, and was a call to their communities to take action.

The resulting piece was directed by multidisciplinary director Hannah Gittos.

Hope 4 Justice highlighted issues such as air quality, the ‘throw-away’ culture, housing quality and inequality, and questioned how we want the world to be in the future.

One song featured the chanting of the name of Ella Adoo-Kissi-Debrah, the nine-year-old Lewisham schoolgirl who was the first person in the UK to have air pollution listed as a cause of death.

Around 100 young people performed the choreography, created and performed by 11- to 18-year-olds from different groups, including secondary schools, Trinity Laban Youth Dance Company and Bellingham Dances.

This socially engaged project demonstrates the active contribution of the artist in society. It is the culmination of over a year-long engagement by Trinity Laban’s Children and Young People and Public Engagement programmes.

The goal of the programmes is to engage with the local community by delivering high-quality artistic experiences and providing study and career pathways for children and young people across Lewisham – particularly those from diverse backgrounds, including low socio-economic groups, ethnic minorities, and other underrepresented groups.