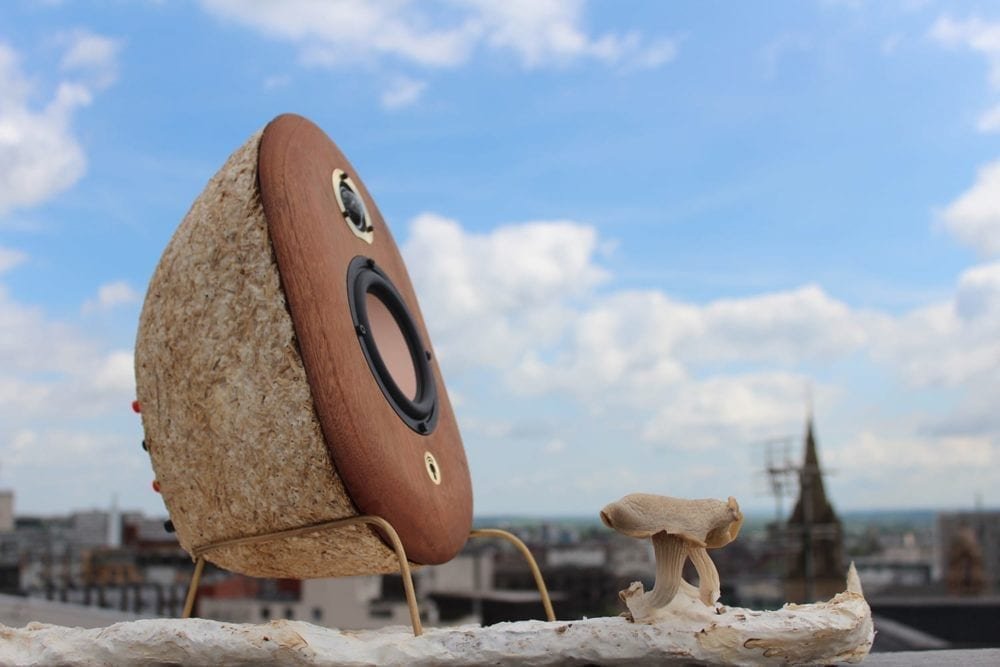 Speakers made from the roots of mushrooms have been designed by a Nottingham Trent University student to create a new sound.

Bertie Ford, who created FungiSound as part of his BSc Product Design degree, says his project also sends out an environmental message about the imaginative use of natural materials.

Using mycelium – the material produced underground by mushrooms – the 22-year-old has made casing which also acts as sound dampening for loud speakers.

Bertie, originally from Twickenham in London, says his prototype combines sound quality with sustainability, unlike many other speakers in the market. He also says the speakers work well with softer tones, such as those found in jazz music.

‘Mycelium is the largest living organism on Earth, but few people realise its potential as a sustainable material. Not only does it have comparable properties to materials such as medium-density fibreboard (MDF) it has good sound dampening qualities too.

‘As well as creating a new speaker, I hope to show a currently unconvinced market that organic materials can be used to create high-end consumer products with function and form.’

To create the product, mycelium for oyster mushrooms is grown into a mould and fed coffee waste and a straw mix for around two to three weeks.

When the growth fills the mould, it’s removed and cured in an oven on a low temperature for up to six hours. During this process the mycelium dies and a strong outer skin is created, with all moisture being removed.

As the product is intended to reach the high end of the market, the face of the speaker is finished with a wide range of options such as brass and wood.

‘My hope is that by showing people mycelium’s true potential, it will stimulate more green thinking and open consumers’ minds to other organic materials and sustainability. Mycelium has the potential to be used beyond audio equipment as it has qualities which may be relevant to other industries; furniture and construction to name but two.’

The project was in collaboration with Espresso Mushroom Company, the industrial advisors on the project. Bertie’s design is on show until 10 June 2017 for the Degree Show at the university’s City Campus.

Professor Amin Al-Habaibeh, a professor of intelligent engineering systems, who supervised the project, said ‘Bertie has taken materials commonly seen as agricultural waste and shown how they can be used, with help from mycelium, to create an innovative new material and new products. Not only does it bring something novel to consumers, but it carries an important message by showing what products can emerge when we open our minds to sustainable and organic materials.’