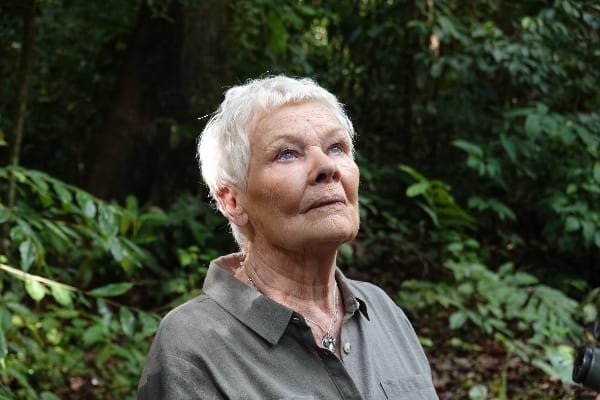 Dame Judi Dench will come face-to-face with some of the world’s most amazing biodiversity – and major environmental challenges – in her new Atlantic Productions for ITV documentary Judi Dench’s Wild Borneo Adventure.

Due to reach our screens early July, Judi Dench’s new documentary will take her on a journey to uncover the lush rainforests, magical wildlife and spectacular coastline of Malaysian Borneo – and the threats which these species and habitats face.

The film will feature Judi’s discussions with leading scientists from SEARRP who are working to protect some of the most biodiverse places on Earth.

‘This new documentary with Dame Judi provides an opportunity for us to showcase how, with our partners in Malaysia, we are working to study and protect rainforests and demonstrate the critical role they play in regulating the Earth’s climate, maintaining biodiversity and supporting human livelihoods and wellbeing. The funds raised from this event will contribute to our key mission to train and mentor the next generation of scientists and conservation leaders.’

Q & A with Judi Dench

Sponsored by Rainforest Trust, the premiere screening will include a live Q&A with Judi Dench and the film’s executive producer Anthony Geffen.

Tickets are priced at £50 plus the opportunity to contribute to research as a donation, with all proceeds going to SEARRP. Click here to book your tickets.

‘We are delighted to be sponsoring the world premiere of Judi Dench’s new documentary, which promises to be a wonderfully entertaining and enlightening evening. Rainforest Trust have been protecting rainforests for 30 years and have placed over 20 million acres under permanent protection. Our work with our committed conservation partners such as SEARRP is vital to ensure the survival of millions of endangered species, and saving these forests from destruction is also vital in the fight against climate change.’

Tropical rainforests are home to the greatest number of plant and animal species found on Earth. Covering only 5% of the planet’s surface, these forests house close to 50% of global biodiversity.

Some 500 million people live in tropical forests, and they are essential to the livelihoods of a further one billion people.

Tropical forests store vast quantities of carbon and have the potential to play a major role in mitigating climate change.

Click here to book your tickets to this VIP film screening with Judi Dench.