The street artist with something to say Every day, we wake up to find the world’s a little bit different, and that changes have been made while we were fast asleep. But one artist is changing the world in a very different way, and using his art to help up us wake up to issues around truth around rights. Mau Mau’s street art carries hard-hitting messages on everything from corruption and social injustice to environmental disasters. He’s been compared with Banksy, which he likens to a ‘comparison with The Sun’, for his impact on urban walls and public spaces all over the world. ‘I was 16 when I sprayed my first piece on a wall’, he tells PQ. ‘It was at the time when everyone was buzzing about subway art – graffiti on trains in New York. I got a can of car paint and gave it a go. It was just a character and some lettering.’

Before long, Mau Mau had honed his artistic skills and was using them to get across issues that were rattling his cage. His day job in the ‘90s was running Sewerside, a skate clothing label with its own skate ramp and sound system that designed clothes and hosted festivals. ‘The designs I did always had a bit of a message, reflecting what was going on at the time with the environment and the Criminal Justice Act,’ he said. ‘If there’s a good message on a T-shirt it gets worn and gets seen. It has impact.’

For Mau Mau it was a natural progression to move to a bigger scale – and by ‘bigger’ we mean massive. ‘Our office was this big old warehouse’, he remembers. ‘One day I just got a couple of cans and started to sketch an image on the wall. It was great to be able to paint something big! With time I got quicker and more confident and started doing stuff outside. It felt good to paint things in the street where people could see them.’

Mau Mau’s currently got projects underway in Jamaica. He’s getting ready for a show in Tokyo in October and working on a book which should be ready for release next year.

As a progression from his T-shirt design days, Mau Mau’s street art came with a message from the start. ‘The “message” has always been a reflection of the Babylon system carry on!’, he says. ‘I read things, watch the news, hear about stuff that winds me up – environmental, political, financial. It’s the same stuff that winds a lot of people up. When something inspires a reaction I want to go and paint it.’ 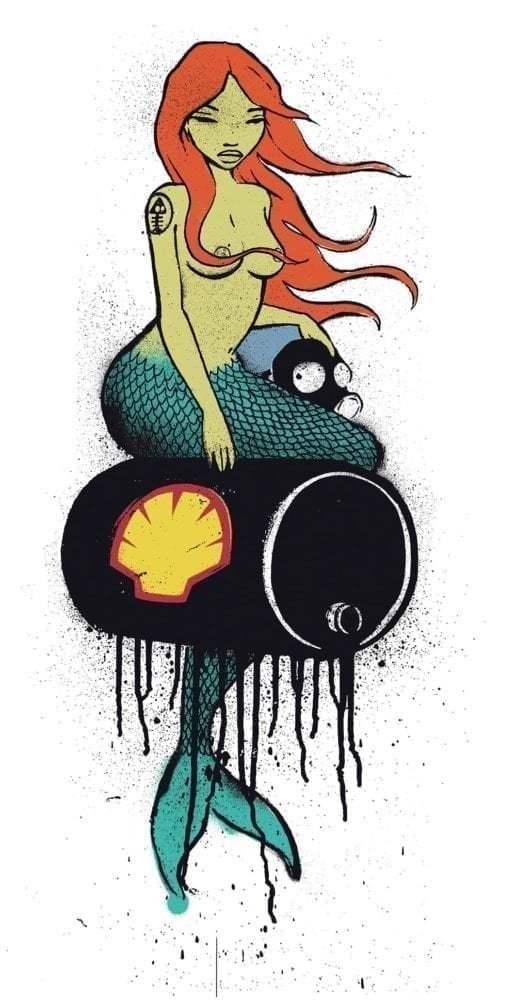 Sometimes Mau Mau spots a great wall when he’s on the bus or driving about, but he’s also chosen sites that are relevant to the piece he’s painting. ‘In a nearby town they were chopping down woodland to build a McDonalds’, he says. ‘I did a piece, Where the Woods Was, near the site entrance so that the message and the evidence were both plain to see. Because it featured Winnie the Pooh, everybody could relate to it.’

While Mau Mau doesn’t like to use the word ‘proud’, he’s pleased with different works for different reasons. ‘One of my favourites is The 3 Monkeys because it’s just a simple image with a simple message that rings very true and has a nice impact on the street’, he tells PQ. ‘I was honoured to be asked to paint an image of His Majesty (Haile Selassie) in Trenchtown and was pleased to get publicity with my Olympic Takeaway image.’ This work was buffed as part of the street cleaning campaign ahead of the London Olympics, but to Mau Mau that only served to underline the point of the painting. ‘Corporate sponsorship is king’, he said.

Mau Mau tries to make his images humorous as well as thought provoking, to reveal the irony of often grim situations. Still, he admits to getting ‘frustrated and annoyed’ by people who ‘take what the system feeds them’. ‘The imagery you see on the streets all the time is basically imagery that’s allowed to be there because it’s paid for and it’s selling you something’, he says. ‘If something comes up that’s actually got a message or is something creative, then it will often have come from graffiti art. It’s a free voice in a commercial world. I think we all know that the environment is just another pawn in the political process. You can score brownie points with it, but at the end of the day big business drives politics and what’s good for business will never be good for the environment.’

Staying true to his background in t-shirt design, Mau Mau also works with THTC to turn his artwork into organic, ethical t-shirts for the ‘UK’s most ethical menswear brand’ (ranked by ethical consumer).

For Mau Mau, the strength of graffiti is that it simplifies the message. If you pick the right spot you can also reach a wide audience – and the internet helps spread the message even further. But there are downsides, too; as well as the anti-social hours kept by street artists and the challenge of navigating spiked fences, security cameras and even tides, there’s always a risk of getting caught. ‘The laws around street art are that if you get caught you can be prosecuted for criminal damage’, says Mau Mau. ‘I don’t like them, but it makes it more of an adventure and feels good when you get away with it. I’ve been chased by police several times – but have always got away. In my experience some pieces I have painted have been buffed almost straight away, but others get left up. I think that’s quite interesting. What makes an image socially acceptable and what the authorities deem to be ‘safe’.’