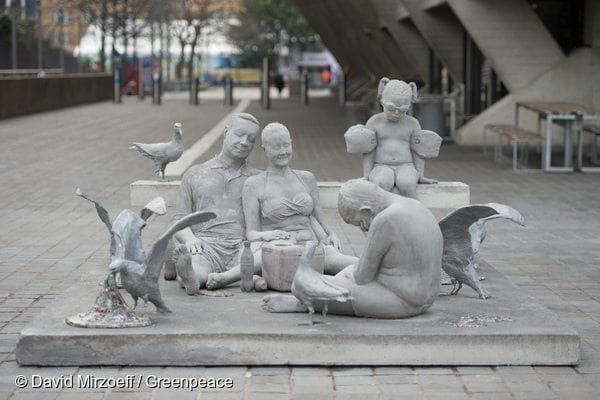 The artwork, Plasticide, has been produced in collaboration with Greenpeace and is installed outside the National Theatre in central London. The aim is to bring home the stark reality of plastic pollution in our oceans and its impact on marine life.

‘Through my work I’ve seen first-hand the deluge of plastic on our coastlines and swirling around our seas. The build-up of a man-made material like plastic in the vast expanse of our seemly untouched oceans is a visceral reminder of humankind’s devastating impact on our environment. Through Plasticide I want to bring this message back to home: our oceans, and the marine life which inhabits them, literally can’t stomach any more plastic.’

Featuring the distinctive style of Jason’s underwater installations, the sculpture weighs 2.5 tonnes and features life-size human figures, including a cast of the artist’s daughter.

Jason’s previous works include The Rising Tide, installed in the Thames near Parliament last year, and Museo Atlantico, a captivating sunken world populated by over 300 individual sculptures sunk off the coast of Lanzarote, Spain.

‘Greenpeace is proud to work with Jason deCaires Taylor to shed light on the enormous tide of plastic pollution ending up in our oceans. His sculpture, Plasticide, reflects the reality that throwaway plastic doesn’t just disappear when we are done with it, but often ends up in the ocean where it causes untold harm to marine life.

‘Studies have shown that 90% of seabirds now have plastic in their stomachs. The problem highlighted in this sculpture would have seemed surreal fifty years ago, but it’s now a grim reality. All plastic is made on land and it’s here we need to see action to reduce the flow of plastic into our oceans.’

Plasticide will be outside the National Theatre for two weeks, 23 March-06 April. 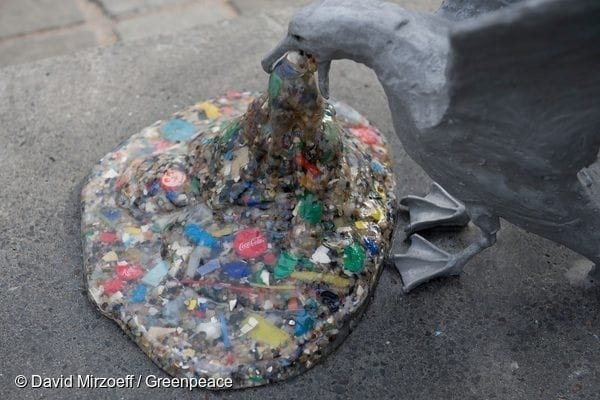 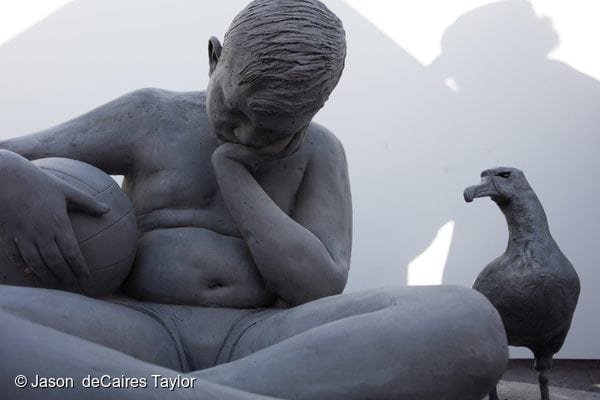 Click here for more about Jason deCaires Taylor and his work.