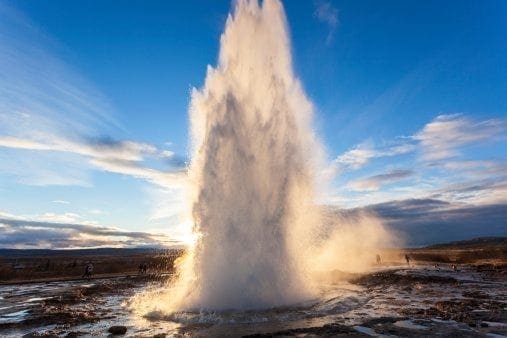 Iceland’s capital city got its name from the plumes of ‘smoke’ Viking settler Ingólfur Arnarson observed as he landed on the shores of what became the world’s northernmost capital. Reykjavik means ‘smokey bay’, but the clouds that puff and burp from the frozen ground are actually columns of steam, spurting from geysers that channel water that’s been boiled beneath the Earth’s surface.

Iceland sits on top of the Mid-Atlantic ridge, the 40,000km crack in the ocean floor that was created when the North American and Eurasian tectonic plates separated. As you’ll remember from your geography lessons, tectonic plates can rub against each other, collide head-on or move apart, exposing the lava sea that lies beneath. When this happens, the pressure is released in an eruption of lava that streams to the surface and cools to form new land. And that’s what’s happening in Iceland.

Between 30 and 40 of the volcanoes on Iceland’s central plateau are active, meaning they’ve erupted within the last few centuries. Four of them could have blown at any time during our visit in February; Katla, Hekla, Bárðarbunga and Grímsvötn are well overdue a major eruption. We all remember what happened when Iceland’s other major volcano, Eyjafjallajokull, erupted in 2010, spewing an ash cloud that caused travel chaos across Europe and beyond. That was a mere burp; history reveals that a full-on eruption – like the one in 1783 that poured out the greatest lava flow witnessed on Earth – can lead to famine at home and even spark revolution abroad.

So are the volcanoes cause for concern? Not for the locals. We wanted to make the most of the three days we had on the island so we took advantage of a ‘buddy‘ system offered by Icelandair. The deal is that you explain what kind of holiday you’re after and then a volunteer from the airline – in our case Ottar from the IT department – creates an itinerary and ferries you round in a battle-proof 4×4. Your buddy joins you for meals and excursions and Icelandair foots their bill. It’s a brilliant idea that means you get a bespoke break tailored to your interests and – arguably the best part – you get to see it all through the eyes of a local.

Even though the buddy campaign finishes on 31 March 2017, you can still take advantage of an Icelandair stopover – and stay tuned as Icelandair turns 80 this year, so we’re sure the airline will have other exciting plans to announce before the year’s out.

Back to the volcanoes… We were travelling with our almost-one-year-old and just-nine-year-old daughters; we were keen to know what the risks were and whether we should avoid any parts of the island for safety’s sake. Ottar wasn’t even slightly fazed; they were part of the natural landscape and nothing to worry about. No one lived up in the mountains, he assured us, and – even though a volcano could erupt without warning – he was confident no one would be harmed if it did. So that was that.

Welcome to the wilderness

As we drove out of Reykjavik we met a wilderness I’d never experienced before. Mountains soared from barren land sprayed with snow, their craggy peaks jutting greys and blacks into a sky that never quite got light. The only trees in this icy desert were grouped in small man-made spinneys; Ottar shared a local joke that if you’re lost in Iceland you just need to stand up. Nothing could live here. Nothing could grow here. And yet it does.

The same geological activity that creates the volcanoes provides an endless supply of geothermal energy. Over 90% of homes in Iceland are heated using natural geothermal heat – one of the cheapest and cleanest forms of energy in existence. Hot springs can be found almost everywhere, and the meltwater created by sub-glacial volcanoes provides the country with a huge potential source of of hydroelectric power. All this clean energy has made Iceland one of the least polluted countries in the world.

We witnessed Iceland’s hydro-electric might at the Ljossafoss Hydropower Station museum. The interactive exhibition was as entertaining for the adults as it was for the kids, and it was impossible not to leave with an intense sense of admiration for how right Iceland has got it.

The advances made are perhaps in part due to an awareness of the island’s vulnerability on the geopolitical stage. It has no army and there is no fear of attack, yet a war elsewhere could spell disaster for an island nation in the North Atlantic that can’t even grow its own trees.

So how can you live off land that’s too cold to farm in order to avoid dependency on foreign imports? Iceland’s answer was to build greenhouses. Lots and lots of greenhouses. Their artificial lights, powered by geothermal energy, blaze during the long, dark winters, creating fiery orange patches of life that look beautifully absurd in their icy surroundings.

Inside the high-tech glass structures you’ll find everything from flowers to bananas, and one has even opened its doors to visitors. Step into the atrium at Friðheimar and you’ll find a hidden gem of a restaurant, where you can watch your lunch grow before your very eyes. You can enjoy a bottomless bowl of tomato soup served with delicious fresh breads and cucumber salsa, wash it down with a Bloody Mary or Healthy Mary – a delicious twist on a Virgin Mary, made from green tomato, lime, honey and ginger and sparkling water – and round it off with a green-tomato cheesecake.

Bees fly round freely to act as natural pollinators and the only pest control is biological. Visitors can stroll round the greenhouse to admire the cucumbers, basil and four varieties of tomato that grow under panes of glass that are only 4mm thick. The insane heat required to keep such an uninsulated structure warm in sub-zero conditions comes from a borehole that supplies water naturally heated to around 95ºC. The whole restaurant experience was something akin to taking the back off a watch to reveal the beauty and intricacy of its intelligent design.

The same natural hot springs that keep the tomatoes (and bees) alive bubble through to the Earth’s surface just a short distance away; the ‘Secret Lagoon’ – or Gamla laugin – at Flúðir is Iceland’s oldest swimming pool, and more secluded than the tourist-drawing Blue Lagoon. Jets of hot water keep the water at around 38-40°C – perfect for enjoying a cold beer as you take in the frozen landscape.

You can combine a trip to the Secret Lagoon with a horseback adventure through volcanic hills and valleys with Eldhestar – ‘volcano horses’ – at Vellir farm. Both spots are easily accessible from the ‘Golden Circle’, a road that loops round Iceland’s most popular natural attractions – all within driving distance from Reykjavik. The full circuit can easily be done in a day, and will take you straight past Geysir, the world-famous hot spring in the geothermal valley of Haukadalur. While Geysir isn’t as active as it used to be, its neighbour, Strokkur, shoots boiling water as far as 40 meters into the air every few minutes.

You can’t go all the way to Iceland without getting on a boat and heading out to sea to marvel at the cold, deep blue of the North Atlantic. You might even spot a whale – though our hopes weren’t exactly high when we took to the water for a whale-watching tour.

For starters the minke and humpback are migratory – but more importantly Iceland, alongside Japan and Norway, is one of the only countries in the world in which commercial whaling is legal. Tourists are told whale meat is a traditional delicacy, yet a recent poll revealed only around 5% of Icelanders eat it on a regular basis.

On top of the threat of whaling is the threat of pollution; it’s been estimated that by 2050 there’ll be more plastic than fish in our oceans. Our guides on the Elfing tour were marine biologists with a passion for conservation, and they were thankfully keen to communicate the various threats to Iceland’s whales.

While whales didn’t make an appearance, white-beaked dolphins swam alongside our boat and gave us a great display as they danced in the water. They looked like they were celebrating something very special – and perhaps they’d even enlisted the help of a buddy to share it with.

Icelandair flies from Heathrow, Gatwick, Manchester, Birmingham, Glasgow and Aberdeen in the UK, with Belfast starting in June. There are onward connections to 18 North American gateways.

Return flights to Reykjavik start at £147* from Gatwick and £164* from Heathrow (including taxes).

Long haul passengers en route to North America can opt to stay in Iceland for up to seven nights for no extra flight cost. In fact, if passengers choose to stopover on their outbound journey then they’ll save around £50 per person on APD tax.

Icelander’s free Celebration Stopover Buddy service, which runs until the end of March 2017, promises to turn a stopover into a great celebration. All buddies are members of the airline team; through their local insight and brilliant connections they’re the ultimate party planners for transatlantic guests.

* Prices subject to change; correct at time of going to print

Click here for more on Icelandair’s buddy service. Flights can be booked here.