The Voice of a River 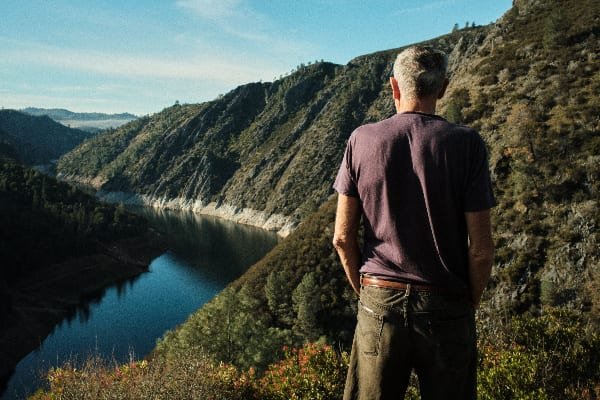 In 1979, Mark Dubois chained himself to a rock behind New Melones Dam in the USA’s Stanislaus River Canyon and threw away the key.

This was no empty gesture: if the Army Corps of Engineers continued to fill the reservoir, Mark would drown.

42 years later, Mark’s story has been told in a short film released for Earth Day 2021. It’s hoped The Voice of a River, created by Citrix Systems and My Green Pod, and produced by Carlos Gonzalez, will remind everyone that one person’s actions can make lasting positive change.

‘We hope The Voice of a River will ignite a sense of passion in all who see it, and demonstrate that one person has the power to make a huge difference to our planet. Every individual has a unique set of skills and passions; if, like Mark, we chose to dedicate those gifts to mitigating the climate crisis, our global community would change the course of the future.’

For a dozen years, Mark had connected to the life of the Stanislaus river and engaged in politics to change what the saw as ‘outdated ideas of development’. Each campaign was unsuccessful.

When Mark chained himself to a Stanislaus River Canyon, it was a desperate act of protective love for a threatened river to which he he felt deeply connected. His actions forced a pause, but the reservoir was ultimately filled.

Mark’s success came in a different form: he hit the headlines and brought nationwide attention to the threats to our rivers, plus broader issues around river and water conservation. The growing movement to protect rivers brought a halt to major dam building in the United States.

Mark’s deep sense of connection to one river in his youth rippled out to a love for all rivers; he co-founded Friends of the River in 1974 and International Rivers Network in 1984.

Mark extended his actions and impact further when he and Teresa McGlashan acted as international coordinators for Earth Day in 1990 – the year Earth Day went global. That year, an estimated 200 million people in 143 countries actively participated in the event.

‘With humanity amidst the greatest transformation of our evolution, accelerating our basic operating system’s shift to love, from fear, is our greatest challenge… and tremendous opportunity.’

Mark and his colleagues received the 1990 Beyond War Award for organising ‘the largest peace event in history.’

The theme for this year’s Earth Day is Restore OurEarth™. If every individual engaged in one small act of restoration – whether planting a tree or throwing a seed bomb – the impact could be enough to save the planet. Happy Earth Day 2021

‘A heart given fully can have a greater effect on this world than we could ever know.’