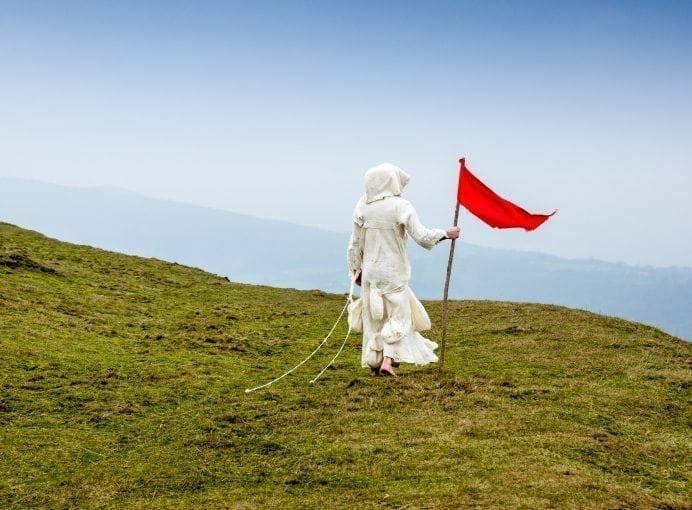 This summer, visitors to the National Trust will be able to explore and celebrate the places in its care through a series of creative programming, exhibitions, visual arts, crafts and architecture as part of its Trust New Art programme, in partnership with Arts Council England.

Here is a selection of Trust New Art projects at National Trust across the UK this summer.

Look! Look! Look!, by internationally renowned artists Heather and Ivan Morison, reflects on the decadent social lives of the wealthy in the 18th century. The giant pineapple-shaped installation is inspired by the tradition of using temporary pavilions for entertaining and dining, and the Georgian passion for importing and eating new and exotic fruits – including pineapples.

For ‘The Makers’, artists Florence Kennard, Alida Sayer and Alec Stevens have created new art works in response to the theme of craftsmanship at Felbrigg. Their film, sculpture and woodcarvings reveal hidden stories and surprising layers of history, giving visitors the chance to experience Felbrigg in a new light.

Hew Locke’s The Jurors was commissioned for the ancient landscape at Runnymede to mark the 800th anniversary of the sealing of the Magna Carta in 2015. Wrought with beautiful imagery, the 12 bronze chairs invite you to reflect on the histories and issues shown, and to debate the meaning of justice.

Will Shannon’s Bothy reflects the pioneering principles and production techniques of Standen’s Arts & Crafts heritage. Tucked away on Standen’s sandstone rocks, Bothy is a space to shelter, reflect and create, built using stained glass, simple furniture and materials found in the Sussex landscape.

Taking inspiration from elaborate 17th-century sugar sculptures and banquets given on the eve of battle, de Vries has threaded the story of Berrington into this Arts Council England award-winning porcelain sculpture, transforming the dining room at Berrington Hall.

Ten large-scale sculptures, built from soaring steel arcs and bars, sit alongside the angular geometry of the formal gardens at Cliveden, Buckinghamshire. Created by Bernar Venet, seen by many as the world’s greatest living French sculptor, this installation is the first outdoor exhibition of Venet’s work in the UK since 1976.

Bouke De Vries’ original work entices visitors to Croome to walk through a reflective cube encrusted with exquisite pieces of Meissen, Worcester and Sèvres porcelain, responding to the theme of ‘expect the unexpected’ at Croome.

Over the course of the summer, through theatre, voice and physical interventions, Tony Plant, Mary Keith and Stan’s Café will explore the history, stories and future of the Shropshire Hills, helping visitors to understand the part they can play to continue caring for it.

Changing Places is an exhibition of contemporary artists’ video, curated by Film and Video Umbrella. Linking the industrial transformations occurring across South Asia today with the places in Britain where the Industrial Revolution began, ten historic buildings, including the National Trust’s Quarry Bank, Cheshire, and Osterley Park and House, Greater London, will host moving image works by artists who all live in, work in, or retain a connection to Bangladesh, India or Pakistan, exploring the narrative of industrialisation and its global legacy.

Many Trust houses and gardens were built with art at their hearts, and Trust New Art continues this creative legacy by introducing new audiences to well-known and up-and-coming artists.

Exploring the often complex themes and collections of National Trust properties, the programme offers a different way to approach the stories that have shaped some of the country’s best known houses, gardens and landscapes.

Visitors will be able to see a variety of new art, including large installations, film and theatrical performances, carving and sculpture.

‘For over seven years, more than 3 million visitors have experienced Trust New Art, our rich and diverse programme of contemporary arts at properties across the country inspired by National Trust places.

‘We are pleased to give visitors new opportunities to experience contemporary creativity that is rooted in our unique heritage, and this summer’s exhibitions and installations offer some diverse approaches to telling the stories of our places.’

Click here for more from the National Trust and upcoming events.