This hotly anticipated independent South African feature documentary investigates fracking in the United States – the technology’s place of origin. Carrying the tagline ‘The deeper the dig, the darker the secrets’, Unearthed investigates what this new method of gas extraction could mean for the semi-arid Karoo, as well as other countries that are opening their doors to hydraulic fracturing.

The world premiere will be held at the Sheffield International Documentary Festival (10-11 June 2014).

The documentary covers the extensive journey of Karoo-born director, Jolynn Minnaar. Over the course of 18 months of research, over 400 interviews and travels across South Africa, the United States, Canada and the United Kingdom, Jolynn battles gag orders and no trespassing zones, loses cameras both to extreme heat and subzero temperatures and suffers first-hand chemical exposure from drilling sites to get to the bottom of the controversial topic. This really is a ‘rare glimpse into the murky waters surrounding the shale gas industry’.

When Jolynn Minnaar first heard about the fracking in the Karoo, her home district, she was optimistic. Companies seeking to drill in this semi-arid area of South Africa promised that the new process of gas extraction was a safe, time-tested one – a practice that would bring widespread prosperity for the poor, rural Karoo communities.

But after stumbling across a rumoured case of water contamination in Pennsylvania, Jolynn was drawn into an investigation which took her across the United States – the home of the fracking technology – in search of answers. Her discoveries left her horrified.

As the South African government lifts the moratorium on fracking, Unearthed is Jolynn’s quest to share her findings with the residents of the Karoo – before it’s too late.

In the film’s Director’s Note, Jolynn says, ‘For as long as I can remember, after growing up in the Karoo, South Africa’s poor, thirsty heartland, I have always been deeply committed to working toward a better tomorrow for my country.

‘Despite my optimism for shale gas, after visiting the United States to cross-check the promises made to South Africa, I now gravely admit that fracking stands to hurt the ones it claims to help the most. 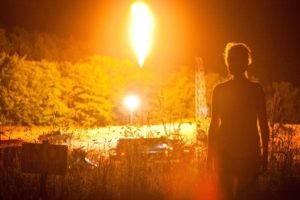 ‘I dedicate Unearthed to the rural, marginalised communities who are least able to withstand the arrival of the shale gas industry, whether in the Karoo, Europe or the United States.

‘I further hope that viewers also gain a deeper understanding into the broader system that is currently failing our world. With an expanding global population and excruciating demands on natural resources, it is no secret that the world is in trouble. The world as we know it urgently needs to hit the refresh button. May Unearthed become a catalyst in that endeavour.’