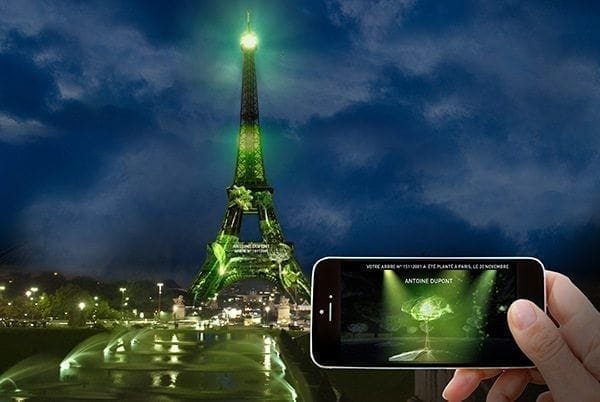 ArtCOP21, which launches today (17 September 2015), will connect hundreds of thousands of people to the climate challenge through a live programme of art in the run-up to COP21.

The 21st United Nations Conference on climate change, to be held in Paris from 30 November-11 December 2015, is a decisive step towards negotiating an international agreement in the fight against climate change.

But it is also an opportunity to promote the complexity of the climate challenge through creative and innovative approaches.

The Conferences of the Parties (COP) are technical events practically inaccessible for the uninitiated, with negotiations focusing on figures, quotas and financial investments. This exclusively political and scientific approach will create a feeling powerlessness and inaction if the real culture of change is absent.

In autumn 2015, thousands of participants, foundations and NGOs, driven by their commitment to change the world, will be present in Paris.

ArtCOP21 wants to transfer this energy to the public through the medium of art through a calendar of cultural events. It will represent a new era in which artists and the cultural world participate by inventing new stories, new representations, other ways to produce, to perceive and think.

Between now and December, over 250 public art installations, exhibitions, concerts, dances, exhibitions, conferences, talks, workshops, family events and film screenings will take place right across Paris – and the world! So far 15 countries are involved – and the number’s rising.

‘Artists, by their sensitivity and particular awareness, can be mediators of this perception concerning the fragility of humanity and of the planet.’

Christopher Miles, Vice General Secretary of the French Ministry of Culture and Communication

Here are just some of the artistic and cultural events that will be taking place as part of ArtCOP21. Click here for a full programme of events.

To give the public a voice that is heard by the decision makers, COAL (the Coalition for Art and Sustainable Development) and LEMOAL & LEMOAL Architects have designed COPBox – a participatory project designed to collect citizens’ voices and raise awareness of the climate challenge.

This public pop-up space allows citizens to share their ideas about climate change by recording a personalised video message to negotiators from 195 countries who are gathering later this year at COP21.

These messages are the symbol of a collective and international mobilisation for climate action. They are freely available online and will be transmitted to the Secretariat General of COP21. A selection of the best messages will be published on the official COP21 website.

COPBox will tour a dozen venues in and around Paris before reaching COP21 this December.

Radical Action Reaction (RAR) is an art project proposed by the duo of internationally renowned artists Ackroyd & Harvey for ArtCOP21, in an extension of their work Beuys’ Acorns based on the renaissance of 7,000 planted oaks in Kassel in 1982 by the artist Joseph Beuys.

In autumn 2015, the Beuys’ Acorns piece – composed of one hundred oak saplings sprung from the acorns of Beuys’ trees – will be exhibited in national theatres of Bordeaux, Lyon, Mulhouse, Nantes, Nice and Tourcoing. Each exhibition will be accompanied by conferences and debates concerning adaptation to climate change.

On 29 November at the Jardin des Plantes, a monumental art installation of a magnificent tree will be unveiled in front of a curtain of living grass to open COP21. It celebrates the role of trees in the adaption of urban spaces in response to climate change.

The symbolic tree will join the Arboretum at the National Museum of Natural History, acting as a catalyst for a series of public plantations and responses in a cultural network committed to increasing awareness of climate issues.

One Heart One Tree

From virtual to reality, artist Naziha Mestaoui invites us to share the experience of One Heart One Tree, an outstanding application through which the beating of our hearts is used to power a tree.

A specialist in visual and sound projections, the Belgian-Tunisian artist Naziha Mestaoui has created a spectacular work of art that will transform the capital into a forest of light during COP21.

At the point where virtual and real coincide, this project is primarily a citizen project. One Heart One Tree intends to establish, via a smartphone app, a virtual tree that will be symbolically projected onto major monuments across the capital, including the Eiffel Tower (see main image, above).

Each virtually designed tree will have a tangible impact, since it will lead to the planting of a totally unique, registered and real-life tree.

This tree will be planted through reforestation projects taking place across the five continents producing a series of positive social and environmental initiatives. Planting a tree captures CO2, cleans the air and water, regenerates biodiversity and produces natural fertilisers.

Through One Heart One Tree, the goal is to plant millions of trees. The distance between reality and virtuality is bridged by this fantastic innovation. At the heart of this project is the intention for technology to reconnect us with Nature.

Click here to check out the ArtCop21 programme and find out about how you can get involved.