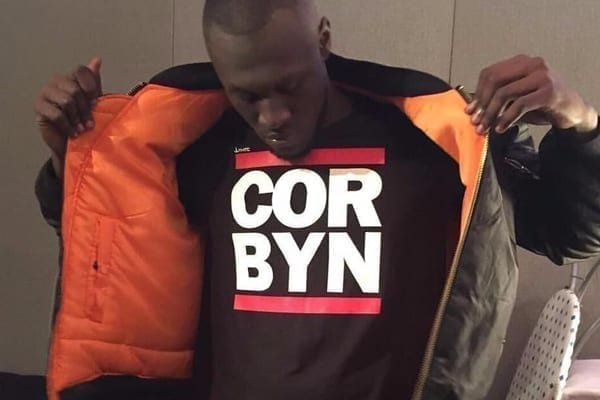 THTC is famous for the political messages and edgy artwork on its organic T-shirts – and now the award-winning company has stepped into the lion’s pit of British politics.

A few years ago, the ethical T-shirt company joined forces with Momentum for a new line of GOTS-certified organic cotton T-shirts. Together with the socialist campaigning NGO that supports Jeremy Corbyn, THTC is calling for a ‘new kind of politics’, and using fashion to call for political change.

The decision to back Corbyn came in early 2016, when THTC’s community put forward ‘a lot of requests’ for a T-shirt with a ‘Corbyn’ design. ‘Later that year, The Mail on Sunday ran a front-page article accusing Jeremy Corbyn of using sweatshop labour’, says Gav Lawson, founder of THTC. ‘Essentially the story was that Momentum had produced campaign T-shirts printed on Gildan blanks. Gildan is known to produce its clothing in some of the world’s poorest countries, exploiting both the wage gap and poor human rights protections.’

Like the majority of bands and artists around the world, Momentum made the economical choice, apparently unaware of Gildan’s track record.

‘What made the story incredibly angering was that the very same issue of The Mail was filled with advertising from brands such as Primark, H&M, Hollister and Claire’s Accessories – all of which produce ‘fast fashion’ and have exploited sweatshop labour’, Gav tells us. ‘We decided to take action and show our support for a political figure who has dedicated his life to fighting for human rights, the environment and the poor.’

THTC did a small print run of an alternative, ethical ‘Corbyn’ T-shirt (see main image). ‘We came up with the Run DMC-memeification design after a few beers on the Southbank with our pals from the hip hop outfit Too Many T’s and a chap who now works in Corbyn’s leadership office’, explains Ashwin Bolar, who runs THTC’s digital marketing. ‘It’s the perfect blend of hip hop and politics – a call back to the dubstep T-shirt of the early 2000s. We’d been sitting on the design and hadn’t done anything with it.’

The ‘Corbyn’ T-shirts sold out pretty much instantly, and Gav decided to donate 20% of net sales to Momentum. Soon after, Momentum contacted THTC directly, and so began a partnership that continues to this day.

With all that support, you’d expect Jeremy Corbyn to wear THTC clothes in public. ‘He actually does!’, Gav tells us. ‘He’s got one of our organic cotton formal shirts, in which he has been regularly pictured. We’ve also given THTC T-shirts to quite a few MPs on the Labour front bench – Richard Burgeon MP, Emily Thornberry MP and our local MP, Rupa Huq, who has even mentioned THTC in parliament’.

Politics in the DNA

Politics has always been part of THTC’s DNA – the very fabric of its T-shirts is a source of political disagreement. The clothes are made from hemp, the cannabis plant. Hemp is exceptionally versatile: as well as being a great source of textile fibre, it’s a medicine, a protein and can even be used to make bioplastic.

Click here to find out why the THTC ‘Love Has Borders’ T-shirt is a MyGreenPod.com Hero

Hemp uses a fraction (10-15%) of the water required by conventional cotton, and requires none of the pesticides. Cotton, which accounts for under 5% of global agriculture, consumes over 25% of the world’s pesticides – and most of the world’s cotton crops require irrigation, drawing water away from the poorer communities that need it.

Ranked the UK’s most ethical menswear brand by Ethical Consumer Magazine, THTC provides all its garment workers with a paid living wage, and all THTC products are certified organic. The majority of high street T-shirts and apparel don’t carry organic certification; according to Gav, the brand owners ‘don’t seem to care’. During a day of market research in 2018, Gav says he received ‘blank looks’ from managers of high street shops when they were asked whether their clothing carried any form of organic or ethical certification.

Over the 20 years THTC has been trading, Gav has watched many small independent ethical fashion brands go out of business while big high street labels spend more money and energy on trying to appear more ethical. ‘Most of this is greenwash’, he says. ‘I would urge anyone who wishes to improve the lives of those less privileged than ourselves, those who are essentially living their lives in modern day slavery, to do one thing: find out where the products that they are buying actually come from and how they are produced. Buy less, but spend a bit more money on truly ethical products and boycott products and brands that don’t care about people and planet. The only way the scumbag brands will change their ways is when their profits start to disappear. They want us to remain ignorant, so ask questions, demand answers and hold brands to account.’

THTC has survived this long because it has created a family of hundreds of positive, talented and inspirational people who support the brand and believe in its ethics. THTC is a movement, and it is nothing without the people.

Click here to view the full range of THTC T-shirts.