ArtCOP21 – the global festival of cultural activity on climate change

With the support of Bloomberg Philanthropies and creative sustainability charity Julie’s Bicycle, Ice Watch will showcase 80 tonnes of ice from a fjord outside Nuuk, Greenland. The goal is to inspire public action against climate change.

Harvested from free-floating blocks of ice, the work will be arranged in a clock formation on the Place de la Republique on Sunday, 29 November 2015 – the day before world leaders and their climate teams gather in Le Bourget, Paris to discuss how to ensure a stable climate for future generations.

‘From my visit to the Arctic last year, I have a very lively memory of the horrifying noise and sight of huge ice blocks cracking and breaking away from the pack.

‘The Arctic is indeed the gatekeeper of climate disorder: for years, this region has been sending us signals that we cannot neglect anymore. The international community must hear them and turn them into acts.’

In the days that follow, the ice will be allowed to melt in the square, offering the general public a glimpse of climate change on our planet.

‘Today we have access to reliable data that sheds light on what will happen and what can be done.

‘Let’s appreciate this unique opportunity; we, the world, can and must act now. Let’s transform climate knowledge into climate action. As an artist I hope my works touch people, which in turn can make something that may have previously seemed quite abstract more a reality.

‘Art has the ability to change our perceptions and perspectives on the world, and Ice Watch makes the climate challenges we are facing tangible. I hope it will inspire shared commitment to taking climate action.’

Eliasson frequently alters the public’s perception of the environment through his art projects, addressing problems and proposing practical solutions.

In 2012, together with solar engineer Frederik Ottesen, he designed and launched Little Sun, a social enterprise that produces and distributes solar-powered LED lights.

The lanterns are designed to provide a safe, healthy solution for the nearly one quarter of the world’s population that do not have access to electricity.

‘Through our actions we are now close to terminating the period of stable climate that served as the condition for civilisations to arise and flourish.

‘Science and technology have made it possible for us to destabilise Earth’s climate, but now that we understand the mechanisms behind these changes, we have the power to prevent them from growing.’

Minik Rosing, Professor of Geology, the Natural History Museum of Denmark at the University of Copenhagen 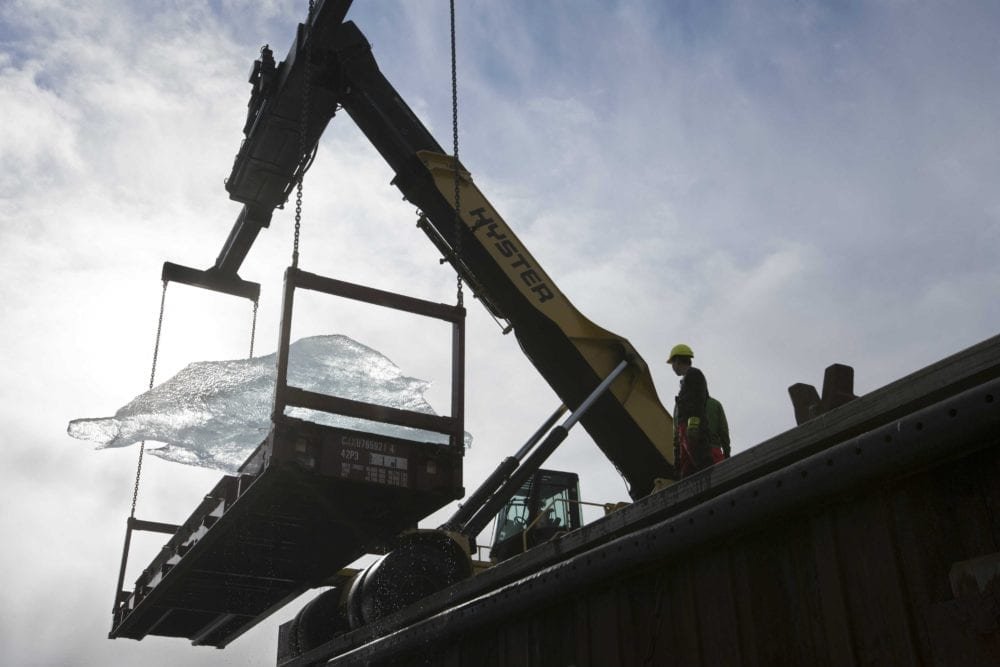 ‘Ice Watch is a great example of how public art can draw attention to big challenges and spur people to action.

Depending on weather conditions, Ice Watch is expected to be on view until 11 December, the last day of the conference. Remaining ice will then be brought to local schools and cultural institutions as part of an extended community educational programme.

The project will be realised in collaboration with Julie’s Bicycle, a leading not-for-profit organisation advocating sustainability in the cultural and creative industries.

‘I am delighted to support this exciting and positive initiative, which will not only help those most vulnerable to climate change through the donation of funds raised, but also help to promote COP21 as a critical opportunity for nations to adopt a durable universal climate agreement.

‘I hope that the artwork can inspire ambitious choices which lead to combatting both climate change and desertification.’ Ice Watch is featured on ArtCOP21 with over 300 other arts events, which are supporting the talks as well as a symposium for cultural policy makers facilitated by COAL, On the Move and Julie’s Bicycle.

Ice Watch is a core project of the initiative Artists4ParisClimate2015, which was launched to mobilise public opinion around climate change through interventions in public space by major international artists.

On 09 December, a charity auction will be conducted at Christie’s Paris; artworks will be sold in support of UN-selected NGO projects to combat desertification and climate change.

Click here to find out more about Ice Watch Paris.