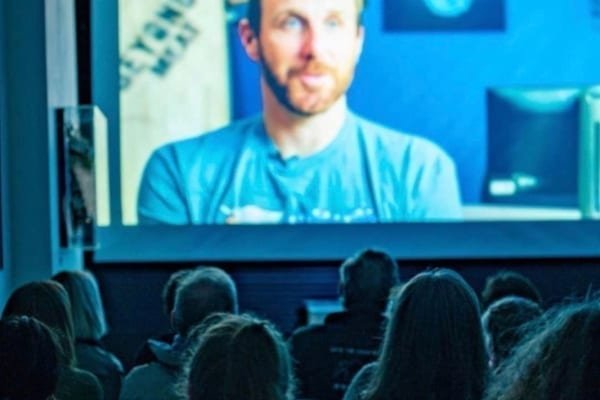 Premieres, debates and environmental art at the ‘Sustainability on Screen’ film festival

A new film festival curated by Rich Hobday, an actor, film producer, vegan and environmentalist, came to London earlier this month to inspire a more sustainable and environmentally friendly ideal.

Rich has worked on major British film productions and TV shows, and is a film producer on many British feature films. He is incredibly passionate about the role films can play in delivering a positive message, and the use of film and drama to convey poignant social and political issues.

The ‘Sustainability on Screen’ (SOS) film festival showed 10 films across two amazing venues and was attended by over 300 people, stimulating debate, discussion and raising awareness of climate change, sustainability, veganism and conservation. The festival inspired people to make changes that could help to save the planet.

Day one took place at The Muse Gallery; SOS was launched with the exciting world premiere of a new documentary series by director and activist James Hoot. Planet Vegan screened its first episode and the exclusive audience, including vegan bloggers and journalists, enjoyed a comprehensive discussion on veganism and a Q&A with the film’s director and its editor, Lars Walther.

This was followed by a screening of the BAFTA Award-winning short film 73 Cows, and the packed gallery had an inspiring discussion with director Alex Lockwood.

‘To see so many people interested in the environment, climate change and veganism was very humbling. The films and discussions really opened people’s eyes to how they can change their lifestyle and habits, to not only improve the environment but their own health. Everyone went away with more information, more knowledge and an appetite for progress. It’s a really exciting time and there is a real commitment from people of all ages to make a difference.’

There was a talk and Q&A with the artists Collette Cooper and Louise McCurdy on plastic waste and the environment.

A highlight of the day was the elephant rescue film Love and Bananas, followed by a moving and inspirational talk by the CEO of Save The Asian Elephant, Duncan McNair. In addition, the festival saw the launch of Bumble Beer, a new, sustainable vegan beer that supports environmental and bee projects.

Day two moved to the magnificent Playground Theatre and hosted further vegan and environmental films, including a workshop on sustainable living by Dominica Roszco.

A discussion and Q&A with some of the leading names in veganism, including Dr Gemma Newman, chef Derek Sarno, Cath Kendall and Romy London, also contributed to this event’s success.

Juliet Gellately (CEO of Vegan charity VIVA!), gave an insight into her work and answered questions, followed by an inspiring and motivational talk by adventurer Lindsey Cole. Lindsey discussed her epic adventure swimming the length of the River Thames dressed as a mermaid, collecting plastic along the way.

Planning for ‘Sustainability on Screen 2020’ is already underway, as Rich Hobday says: ‘I wanted to create a new film festival which provided a platform for filmmakers, documentary makers, activists and new community audiences, to come together to view and debate current films and documentaries. We achieved this and can’t wait to start planning the 202 festival’.

With more films, more guest speakers and another opportunity to send an SOS to the world, we’re sure this will be a roaring success.