‘The Home of Halloween’ 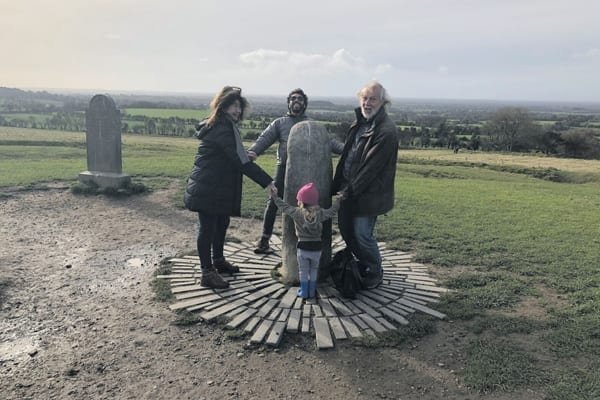 When we visited the Boyne Valley in County Meath on 02 November 2018, we were completely unaware that we couldn’t have timed the trip more perfectly.

It was a family holiday for seven – three generations – to Decoy Country Cottages, a group of eight boutique self-catering cottages in Navan.

The fantastic rural location is just 30 minutes from the centre of Dublin and just over 30 miles from the port. We travelled by ferry as we wanted to be able to explore the area by car; we’d been encouraged to immerse ourselves in the local culture, though what exactly that meant remained a mystery until we arrived in Meath and found we had entered ‘The Home of Halloween’.

Evidence of celebrations hung in the air as we turned quietly into the entrance and through to the courtyard of Decoy Country Cottages. A pirate ghost fluttered eerily on the gate and each of the cottage doors had been dressed with a ghoul. The moon was up and an owl hooted – perhaps at the sight of equally wide-eyed guests.

Signs on the road had alerted us to Spirit of Meath Halloween Festival events taking place all over County Meath from 06 October to 04 November, but we had no idea why the period was so extended or significant.

Research began before we’d even looked at our rooms or taken in the house that would be our home for the week – and the more we read, the more fascinated we became.

In the 17th century, historian Geoffrey Keating described a hilltop fire that took place in Meath on Samhain, the Celtic New Year and the pre-Christian forerunner of Halloween.

Archaeologists have since discovered evidence of intense burning on the Hill of Ward – or Tlachtga, as it was formerly known – dating back to 500 AD. This ancient ritual site was the centre of Celtic religious worship over 2,000 years ago, and the fire festival that took place there signalled the arrival of winter.

Samhain marked the division between the lighter (summer) and darker (winter) halves of the year; by lighting winter fires, early man was trying to aid the noticeably weaker sun on its journey across the skies.

This was also the time at which the barriers between worlds would fall away, allowing spirits to pass through. With the sun in the underworld, the Lord of the Dead – along with various ghosts and fairies – were free to walk the Earth. People used costumes and masks to disguise themselves, hoping they’d be left alone by any harmful spirits that slipped through the veil.
The Hill of Ward is just 15 minutes’ drive from Decoy Country Cottages – but just 15 minutes in the other direction is another equally impressive site that has managed to overshadow its fascinating neighbour.

Just 12 miles away from the Hill of Ward is the Hill of Tara: seat of The High Kings of Ireland and, as the gateway to the otherworld, the sacred dwelling place of the gods. According to some, the Hill of Tara is also the ancient capital of the lost kingdom of Atlantis.

155 metres above sea level, the views from the Hill of Tara are breathtaking, covering by some estimations a quarter of Ireland’s landscape. The elevation may also explain why this was such an important ritual and political site.

In total around 30 monuments remain visible on the summit, though a similar number of constructions have also been detected beneath the surface. A standing stone, the Lia Fáil (‘Stone of Destiny’), was the coronation stone of the Kings of Tara. According to tradition, when a true Irish or Scottish King placed a foot on Lia Fáil it roared to announce his rightful reign.

The oldest visible monument, a passage tomb named ‘The Mound of the Hostages’, dates from around 3,000 BC, making it older than the pyramids.

We hadn’t expected to encounter structures that pre-date the pyramids during our visit to the Boyne Valley, but it turned out the Hill of Tara had company. We headed next to Newgrange, a 5,200-year-old passage tomb built by Stone Age farmers, that covers roughly an acre of land near Navan. Older than both Stonehenge and the Great Pyramid of Giza, this World Heritage Site was just a 20-minute drive from our cottage.

The circular mound is 85 meters in diameter and 13.5 meters high, and contains a 19 meter stone passageway with chambers. It’s surrounded by 97 kerbstones, some of which are decorated with megalithic art.

Click here to find out why Decoy Country Cottages is a MyGreenPod.com Hero

Despite its classification, Newgrange is more a temple than a tomb: it was a place of astrological, spiritual, religious and ceremonial importance – apparently built by a well-organised society with specialised groups that were responsible for the different elements of its construction.

The most magical aspect of Newgrange is the internal passageway and chamber, which are illuminated by the winter solstice sun to mark the beginning of the new year. An opening above the entrance to the passage allows sunlight to penetrate the chamber on the shortest days of the year, which fall around the winter solstice. At dawn, from 19-23 December, a narrow beam of light reaches the floor, gradually extending to the rear of the chamber. As the sun climbs in the sky, the beam in the chamber widens until the whole room is illuminated. In a mind-blowing feat of accuracy from Stone Age man, the event takes 17 minutes, beginning at around 09.00.

A HOME FROM home

We only scraped the surface of the area’s history, but each day brought new questions and observations to discuss when we returned to the comfort of our cottage. The facilities were great and there was plenty of room for us all; a large table in the kitchen provided ample space for big family feasts, and the comfortable living room had a wood-burning stove for warm evenings in.

The owner’s cats and dog became a familiar sight from the first morning, which made us feel even more at home. They strolled in and out of the cottage to our daughter’s delight, and as the evening closed in, someone usually found they had a sleeping cat curled up in their lap.

There was something for every generation: it was at times difficult to drag our daughter away from the small park and play room across the courtyard, and my dad and brother were very pleased to find a games room complete with pool table and air hockey. A small adjoining gym had enough equipment for a decent workout if, by some mystery, you returned unstretched from a day’s exploring.

Our proximity to Dublin meant we’d expected to head over to the city a few times – at the very least to enjoy a proper pint of Guinness. But we only made it once, to see a fantastic Irish House Party performance of superb music and dance at the Lansdowne Hotel.

We could easily have spent a full week bouncing between the incredible sites that make up the Boyne Valley. The Halloween Festival had drawn to a close by the time we left, but the area felt even more magical than it had when we arrived – even without the pirate ghost to wave us goodbye.

Click here for rates and availability at Decoy Country Cottages.