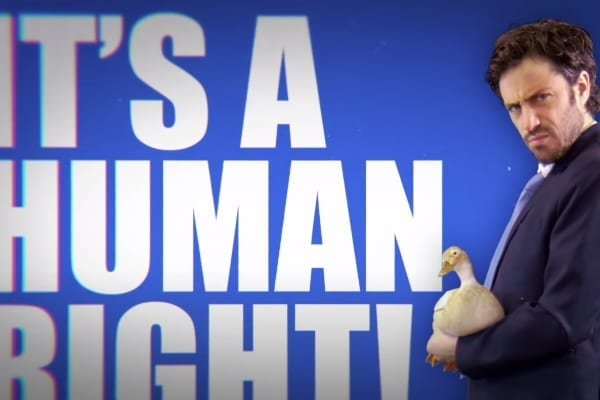 After a successful campaign to raise money to provide hives for 60,000 bees, hip-hop duo Too Many Ts (Leon and Ross) has shifted its attention to trees.

Too Many Trees is a direct-action campaign – launched alongside a new video – to compel viewers to assist in planting an initial 10,000 trees.

It’s part of an almighty multi-million tree target with planting partner and Prince’s Trust affiliated ‘Gone West’. The trees planted will be British oaks, and they will be contractually protected for a minimum of 99 years.

Step up to make a difference

The latest music video, shot at Vauxhall City Farm and produced by The Rattle, features cameos from lots of furry friends and carries a no-nonsense message:‘This Earth is F**ked’.

It’s a beautifully balanced ballad of rage, comedy and genuine concern – and also a rallying cry to fans to step up, combine efforts and make a real difference.

Click here to support Too Many Trees and view the music video.

The global lockdown has sparked a record drop in carbon emissions – expected to be 4-8% over the course of 2020.

However, a reduction of 7.6% is required year-on-year throughout the next decade in order to avoid catastrophic climate change.

Leon and Ross want to use their platform to deliver this message to their audience and be catalysts for real change.

Ross, who has a master’s degree in sustainability, says, ‘We aim to make people feel good, but we also really care about the state of the Earth and have to speak up and take action in whatever way we can. Trying to combine this positive vibe while highlighting the plight of the Earth is not an easy task, but we’ve tried to do that with this project.’

Produced alongside France’s DJar One, ‘This Earth is F**ked’ is an upbeat, funk-infused, old school hip-hop jam with clever lyricism disguising a hard-hitting reality check on the environment and world issues.

The lyrics work their way through climate change, pollution, deforestation, corporate greed and hypocrisy – while maintaining the wit and humour that has become synonymous with Too Many Ts.

‘Launching the track reminds us that there are still many serious issues we are facing, both nationally and globally, and we offer some direct action with Too Many Trees – something we hope will snowball over the years into a huge movement.’

ROSS
Rapper, Too Many Ts

The Too Many Trees campaign will give individuals the opportunity to be part of a solution to climate change, with donations from £2 to plant a single tree and up to £1,000 to offset an individual’s average yearly carbon emissions and have a song written about them.

Highlighting environmental issues through hip hop, Too Many Ts has found a unique way to raise awareness to a growing audience.

The first planting mission will be at a secret location outside London in October, with fans invited to join the band in planting trees for the day.

People will come together with food, drinks and an old-school hip hop playlist co-created by Too Many Ts and their fans.

Click here to add your support to the Too Many Trees campaign.