I Am A Plastic Bag 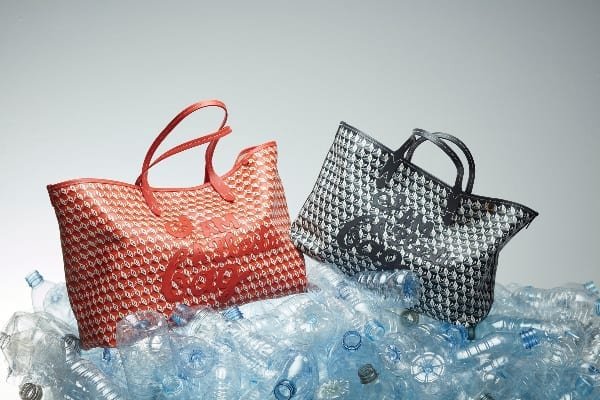 13 years after the sell-out ‘I’m Not a Plastic Bag’, Anya Hindmarch launches a new tote made from recycled bottles

In 2007 Anya Hindmarch’s ‘I’m Not A Plastic Bag’ was an immediate hit worldwide. Importantly, it also helped us to reduce the number of bags we use.

The limited-edition reusable canvas tote was created in response to the growing
environmental challenge of single-use plastic bags and to inspire people to change their everyday actions.

The British Retail Consortium estimated that in 2006, the UK alone used 10.6bn plastic bags, and this figure dropped to 6.1bn in 2010. Specifically, Sainsbury’s cut the number of bags they gave away by 58% in the two years that followed the campaign, giving out 312m fewer bags in 2008 than 2009 and saving 13,200 tonnes of virgin plastic over two years.

‘Since our 2007 I’m NOT a Plastic Bag project, I have not been able to get these words out of my head. The problem of single-use plastic and landfill is far from over, however the mission has shifted from simply being about the ‘awareness’ of using less plastic, to being more about the ‘circularity’ of the use of materials in the supply chain. That is why I have spent the last two years developing I AM A Plastic Bag.’

It has taken two years of testing and researching techniques to find the best methods and partners to create the I Am A Plastic Bag Collection.

The luxurious, cotton canvas feel fabric used to make I Am A Plastic Bag is woven from a yarn created from plastic bottles. The plastic bottles are first sorted, shredded, washed and then turned into pellets. These pellets are melted and extruded into fibres that are then spun and woven to create the fabric. It takes 32 half-litre bottles to make each large tote.

To create a weather-resistant durable finish, the fabric is then coated in recycled PVB, a product that is extracted from old car windshields. To our knowledge, this is the first time that this has been done.

The coated fabric is made by partners in Taiwan, who were the only people who could provide the GRS-certified recycled coating. Taiwan has one of the most efficient recycling systems in the world and is also a pioneer in recycling innovation.

Why the leather trim?

While the initial plan was to use vegan or recycled leather for the trim, after research and expert advice it was concluded that responsibly sourced leather was the best material as the alternatives contained ‘unacceptably high-levels of polyurethane’.

The leather used is a by-product of the meat industry and is sourced from a tannery in Northern Italy, close to where the bag is made. The tannery is gold-rated by The Leather Working Group; it uses traceable European hides that cause no deforestation.

This project is about progress not perfection. Work is underway to create the coated fabric in Italy, as soon as a partner can be found who can do this using recycled PVB rather than virgin plastic. 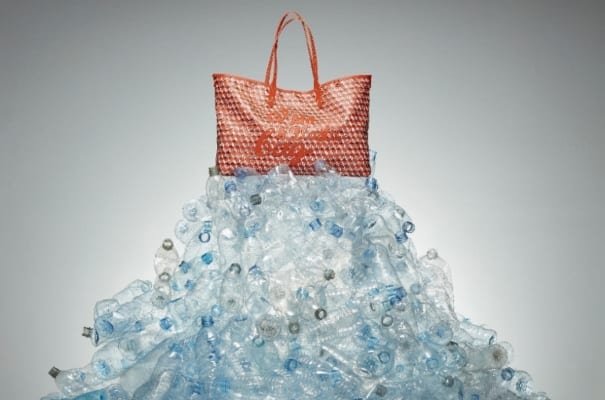 While Anya Hindmarch doesn’t believe that carbon offsetting is the answer, the label has partnered with EcoAct – a global climate change consultancy – to measure the emissions associated with the I Am A Plastic Bag collection and to make this a carbon neutral project.

Both the project and the company have been awarded the Butterfly Mark from Positive Luxury. This is a symbol of trust earned by brands that have adopted sustainability as a business strategy.

Pre-launch, Anya Hindmarch and NET-A-PORTER offered a limited number of I Am A Plastic
Bags on 15 February for London Fashion Week.

At the same time, instead of doing an event, Anya Hindmarch closed its London stores for three days and filled them with used plastic bottles to make a statement about the amount of plastic that is thrown away.

It took over 90,000 used plastic bottles to fill the stores, which were collected by the Anya Hindmarch team from local communities. This may sound like a huge figure, it’s the number of plastic bottles that are purchased globally every six seconds.

The full collection of four colours will launch mid-April in Anya Hindmarch London stores, online and with Matches Fashion in mid-April.

Exclusive launches then roll out with Isetan in Tokyo, Lane Crawford in Hong Kong and Mainland China, David Jones in Australia, Aizel in Moscow and Anya Hindmarch global stores. Each territory will have its own exclusive colours.