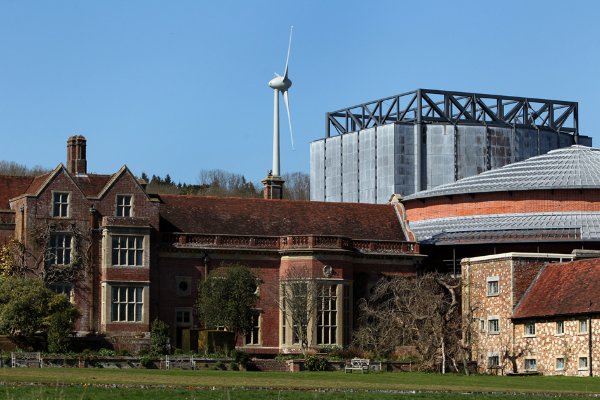 Glyndebourne has announced a new plan to drive further investment in environmental action, as the opera house celebrates 10 years since the launch of its on-site wind turbine.

The turbine was officially launched by Sir David Attenborough on 20 January 2012, making Glyndebourne the first UK arts organisation to generate its own power through wind.

Between 2012 and 2021 the turbine produced the equivalent of 105% of the electricity used by Glyndebourne in the same period, far exceeding its target to provide 90% of the company’s annual electricity needs.

Together with a wide range of energy-saving measures, the turbine helped deliver an 83% reduction in Glyndebourne’s energy-related emissions between 2009 and 2020.

The arrival of the turbine immediately halved Glyndebourne’s own generated carbon emissions and the company continues to pursue further reductions.

In 2021, in conjunction with COP26, the organisation joined the global Race to Zero and committed to halving direct carbon emissions (from a 2019 baseline) by 2030 and reaching net zero by 2050.

In the drive to achieve those targets, Glyndebourne has announced a new two-step approach for 2022, combining a focus on continuing to reduce gross carbon emissions with offsetting to achieve carbon neutrality, whilst driving further investment in new environmental measures at Glyndebourne.

Electricity use at the opera house has already dropped substantially thanks to measures such as modifying the air conditioning system, replacing lighting with low-energy LEDs and installing timers and sensors to ensure that lights are only in use when required.

A further stride forward came in 2018, when Glyndebourne became zero-waste to landfill. Prior to this, CO2 emissions from waste sent to landfill were at a similar level to emissions from gas or electricity. They have now been eliminated completely.

‘Our priority remains to continue to reduce gross carbon emissions. Initiatives undertaken in 2021, including the replacement of 27-year-old gas boilers with significantly more efficient models and a switch to 100% green energy from October 2021, along with other measures planned for 2022, will contribute to this ambition.

‘Recognising that carbon offsetting should be the last step in any climate strategy, the second part of our approach is to commit to investing an additional £25 per tonne of net scope 1 and 2 emissions into new emission-reduction measures at Glyndebourne within the following 12 months.’

The company is also taking steps to make its opera performances more sustainable – all four new productions scheduled for the 2022 Glyndebourne Festival will adopt the baseline principles of the Theatre Green Book, which is bringing theatre-makers together with sustainability experts to set common standards for sustainable theatre.

This will include more material reused from stores, with plans for the disposal or reuse of every component agreed in advance with creative teams.

In the case of Ethel Smyth’s The Wreckers, which opens the 2022 Glyndebourne Festival on 21 May, the focus on sustainability has inspired a partnership with the charity Surfers Against Sewage.

Glyndebourne is taking part in a series of beach cleans with the charity to salvage flotsam and jetsam that can be used as set dressing for the opera, which is set in a remote and isolated Cornish fishing village.

Other recent initiatives include the creation of a dye garden at Glyndebourne to grow plants that can be used to create natural dyes for its costume department.

The company is also phasing out bottled water so that by 2023, all water served at Glyndebourne will be drawn from its own natural spring.